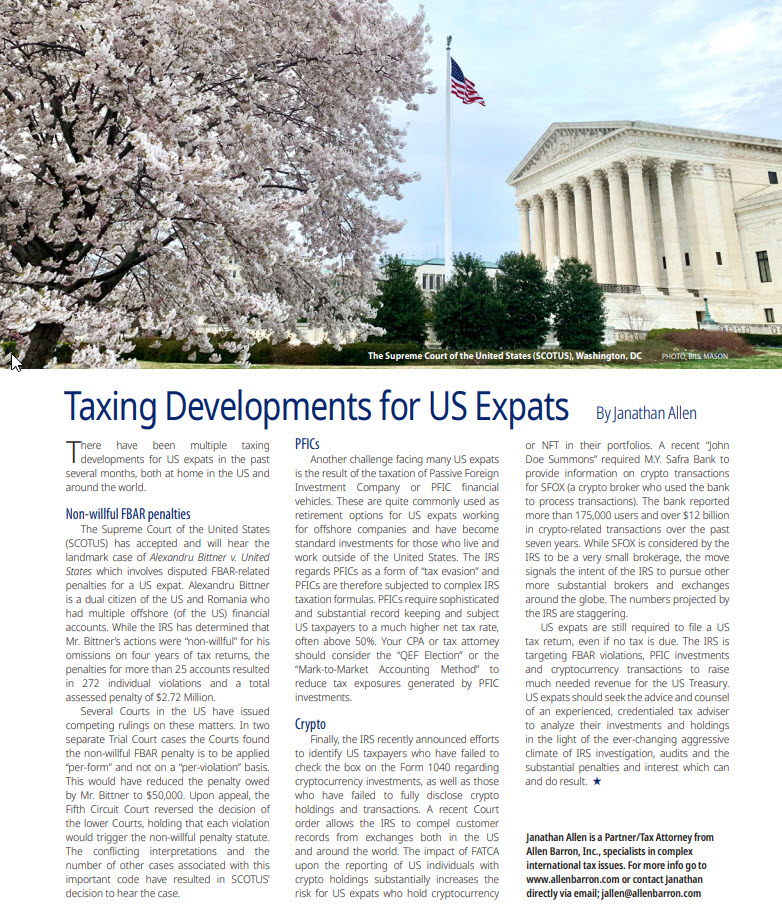 Janathan Allen Has been published in a recent edition of “The American,” a UK publication for US Expats.  Read the full article here:

Taxing Developments for US Expats

There have been multiple taxing developments for US expats in the past several months, both at home in the US and around the world.  The Supreme Court of the United States (SCOTUS) has accepted and will hear the landmark case of Alexandru Bittner v. United States which involves disputed FBAR-related penalties for a US expat.  Alexandru Bittner is a dual citizen of the US and Romania who had multiple offshore (of the US) financial accounts.  While the IRS has determined that Mr. Bittner’s actions were “non-willful” for his omissions on four years of tax returns, the penalties for more than 25 accounts resulted in 272 individual violations and a total assessed penalty of $2.72 Million.

Several Courts in the US have issued competing rulings on these matters.  In two separate trial Court cases the Courts found the non-willful FBAR penalty is to be applied “per-form” and not on a “per-violation” basis.  This would have reduced the penalty owed by Mr. Bittner to $50,000.   Upon appeal, the Fifth Circuit Court reversed the decision of the lower Courts, holding that each violation would trigger the non-willful penalty statute.  The conflicting interpretations and the number of other cases associated with this important code have resulted in SCOTUS’ decision to hear the case.

Another challenge facing many US expats is the result of the taxation of Passive Foreign Investment Company or PFIC financial vehicles.  These are quite commonly used as retirement options for US expats working for offshore companies and have become standard investments for those who live and work outside of the United States.  The IRS regards PFICs as a form of “tax evasion” and PFICs are therefore subjected to complex IRS taxation formulas.  PFICs require sophisticated and substantial record keeping and subject US taxpayers to a much higher net tax rate, often above 50%.  Your CPA or tax attorney should consider the “QEF Election” or the “Mark-to-Market Accounting Method” to reduce tax exposures generated by PFIC investments. 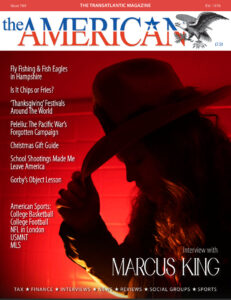 Finally, the IRS recently announced efforts to identify US taxpayers who have failed to check the box on the Form 1040 regarding cryptocurrency investments, as well as those who have failed to fully disclose crypto holdings and transactions.  A recent Court order allows the IRS to compel customer records from exchanges here in the US and around the world.  The impact of FATCA upon the reporting of US individuals with crypto holdings substantially increases the risk for US expats who hold cryptocurrency or NFT in their portfolios.  A recent “John Doe Summons” required M. Y. Safra Bank to provide information on crypto transactions for SFOX (a crypto broker who used the bank to process transactions).  The bank reported more than 175,000 users and over $12 Billion in crypto-related transactions over the past seven years.  While SFOX is considered by the IRS to be a very small brokerage, the move signals the intent of the IRS to pursue other more substantial brokers and exchanges around the globe.  The numbers projected by the IRS are staggering.

US expats are still required to file a US tax return, even if no taxed is due.  The IRS is targeting FBAR violations, PFIC investments and cryptocurrency transactions to raise much needed revenue for the US Treasury.  US expats should seek the advice and counsel of an experienced, credentialled tax adviser to analyze their investments and holdings in the light of the ever-changing aggressive climate of IRS investigation, audits and the substantial penalties and interest which can and do result.